I have been looking at converting my jib halyard system to a fixed forestay. There will be limited adjustment via a vernier plate at the tack, the jib will be 'stuff luff ' and the forestay feed through the jib luff every time out. Now the problem is my jibs have battens and leaving it hoisted between club races is not the treatment for a jibs long life. Then I thought of the plastic jib hanks fitted to the jib to enable the jib to be easily lowered, these were popular years ago. Does another one still use a jib with them for club racing is there a noticeable performance hit? What spacing should be used. This really is a question for the older canoe sailor who can remember their use.

Colin
I have a fixed forestay with adjustment via a pin system. I went for a zip luff.....easy to take sail down after racing etc. if you don't want a zip, Colin Newman will be along shortly as I know that he used a hanked jib recently.

I think, though, that probably there would be a minor, maybe unmeasurable performance hit.
We now know that if there's a sail behind a mast then the drag from the mast is much less than it would be from the bare mast (see wb sails - http://cdn2.hubspot.net/hub/209338/news ... /index.htm
Logically it seems to me the same ought to be true on a much smaller scale with a forestay - if the jib wraps round the forestay its going to be marginally better than a sail set back a few mm from the wire even by the very small and neat 29er jib hank setup. On the other hand if the jib lasts so much better that will be faster too.

Personally I tie the sliding seat down to the jetty at my club and back the jib so it can't flap between races. However I'm just replacing the jib because its disintegrating, so maybe that doesn't work! OTOH I've just looked it up and realised I got the "new" rags over 5 years ago, so perhaps it served its time.
Top

I do recall, when reading a book on fluid flow by a Ascher Shapiro, there were many references to a wire having much more drag than a sloped more aerodynamic shape, such as that found on a foil. But I'd have also thought the shrouds would have a similar effect; so I'm not sure it'd change much in the grander scheme of things.

As long as it doesn't make a huge difference to the amount of turbulent flow over the jib....

But the effect of this would be more pronounced at greater speeds, which I believe you are far better at getting than I am Colin!
AC 298 "Time Warp"
Top

I used hanks on Monkey up until this current set of sails. I would go back to them again as it was easy to drop the jib onto the deck which saves the jib lots of abuse when you need a tow. As for spacing i would say 8 to 10 inches but I will have to measure the old sail to double check. This pic from the 2011 worlds shows 8 hanks along the luff. 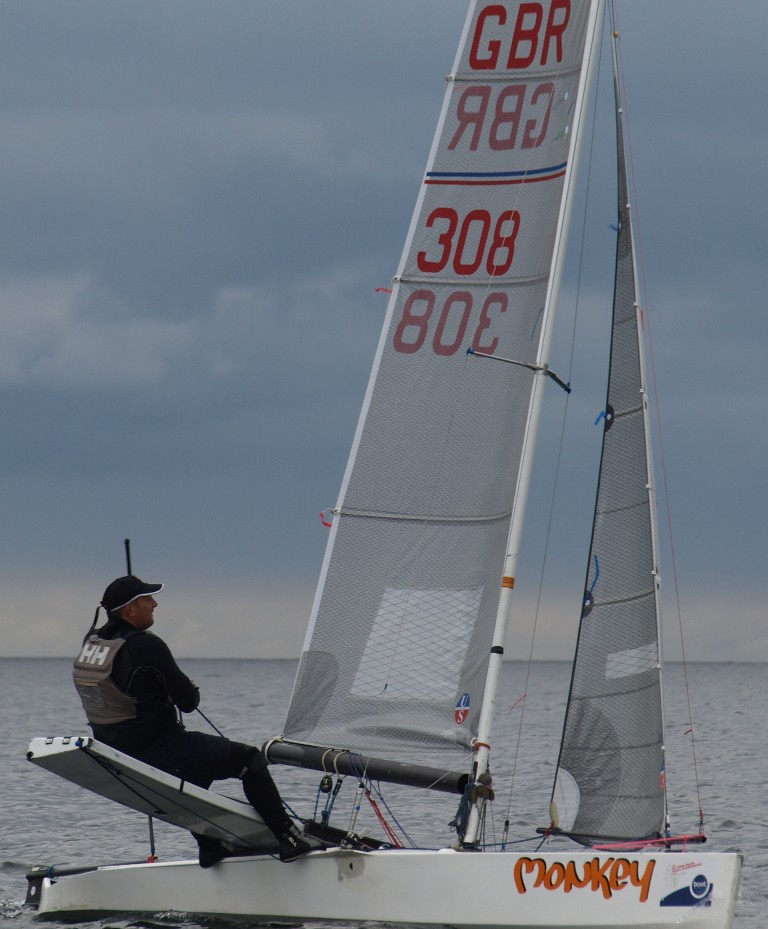 Thanks for all of your replies. The jib on Monkey looks fine to me , so 8 to 10 jib hanks would do it for club racing. Now I assume that you can still buy them?
I did have a long discuss with our class chairman Gaz today, he assured me that the retro look on canoes is still fast, or so I was advised. So I'm off to the timber yard to purchase a 6 foot length of ash to cut down and make some new sail battens. Also been looking in the loft for my old Ratsey jib with the mitre batten with the brass piston jib hanks. I'll be fast at Ullswater Regatta with this new kit.
Everyone is welcome to come for the event along with myself, John E and Cowboy( pumping) Charlie C

Just for info......there's a barber on the South coast that I walked past today called Charlie's......had a notice about trimming ( seemed very reasonable prices!). No mention of pumping.........so, trimming it is then!

Just off to buy a double main sheet block from the bargain bin at Barnes the Chandlery.....it's a bit tarnished, but the brass should polish up nicely and the wood only needs a little teak oil.

Just for info......there's a barber on the South coast that I walked past today called Charlie's......had a notice about trimming ( seemed very reasonable prices!). No mention of pumping.........so, trimming it is then!
Top
Post Reply
8 posts • Page 1 of 1